Joge Town in Fuchu City, Hiroshima Prefecture.
A mountain town where the essence of "tenryou" remains.
The memories of those who lived through the tomultuous transition from the Edo to Meiji periods lingers, along with magnificent traditions, culture and character.
Carefully preserved over generations, the peaceful and historical townscape is tucked away, embraced by the Bingo mountains.
Welcome to Joge Town, where the charm of traditional Japanese lifestyle, architecture, and hospitality abounds. 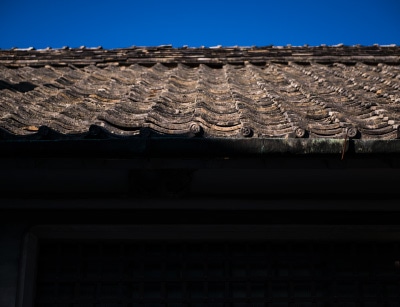 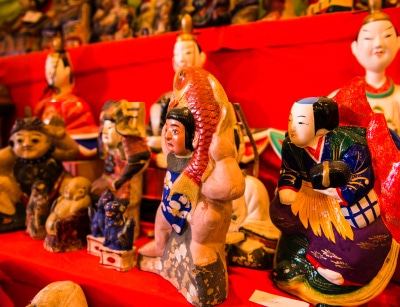 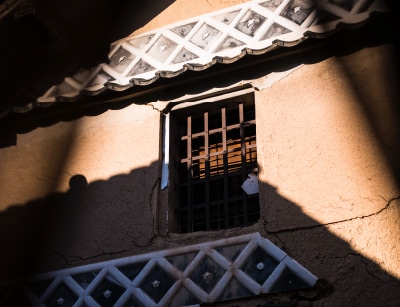 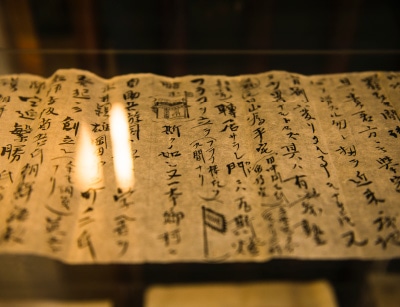 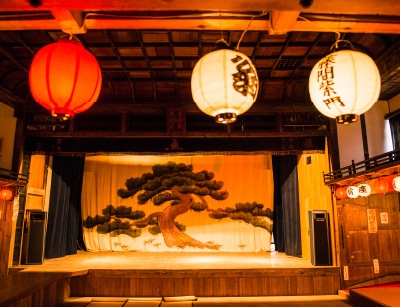 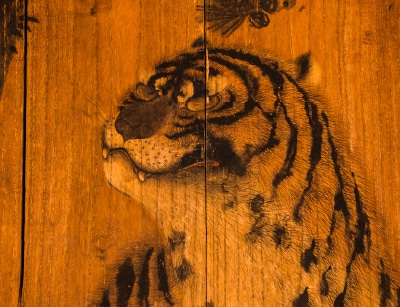 Iwami Ginzan, which once produced 1/3rd of the world’s silver. In order to deliver silver to Kyoto and Osaka, in addition to the shipping route through the Sea of Japan (The sea off the north coast of Japan), the "Ginzan Kaido" or "Silver Highway" which passes through the mountains by land to the shipping port of Kasaoka, was also established.
In the 11th year of the Genroku era (1698)(the era is named after the Emperor at the time), the Fukuyama clan’s Mizuno family collapsed due to the death of their heir and Joge fell under direct control of the Edo shogunate, part of the tenryou area. In the 13th year of the Genroku era (1700), a government administration office was established and in the 2nd year of the Kyoho era (1717) Joge donated 20,000 rocks in sliver (histor- ically, 1 ‘rock’, ‘石‘ or ‘koku’ was the unit of agricultural output in rice required to feed a man for a year. So 20,000 rocks is enough land or rice to sustain 20,000 men for a year. During the Edo period, the value of land was based on ‘koku’, and all agricultural products were converted into this unit) to the Nakatsu clan (from what is now Oita Prefecture).
Until the end of the Edo period, Iwami Ginzan’s Oomori Prefectural Office ran a government branch office in Joge, which was very prosperous. It is believed that from the end of the Edo Period, until the Meiji Restoration, the funds (silver) from this office/town supported both regimes.
The financial strength of the local money lenders would eventually be used to improve welfare and ed- ucation in their home town. Without relying on the administration, the Gishu Foundation was established with their own funds. This action continues until the Heisei Era (The current emperor, ending in 2019), and influenced history for 100 years.
The memories of the towns prosperous days exist in the buildings, streets, and people’s minds. We would like to show the world this "Treasure of Nippon" (Nippon is the Japanese word for Japan), though Joge "tenryou" tourism. 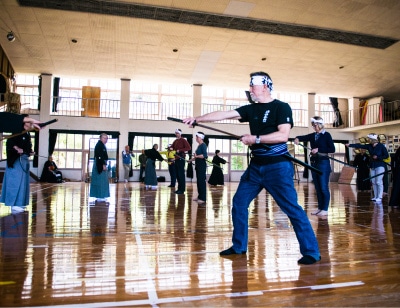 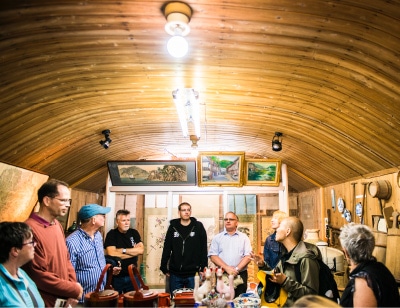 Many guests with a deep interest in Japanese culture participate in a Joge "tenryou" tourism tour. 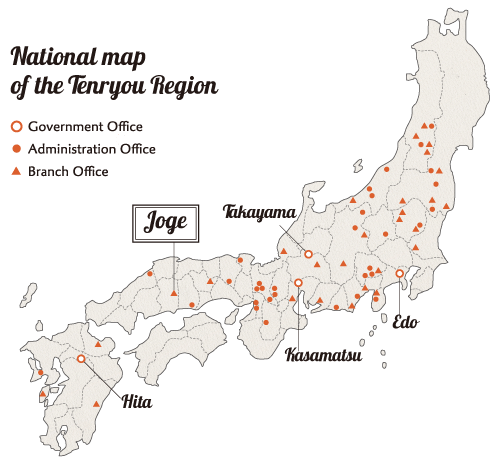 Tenryou : territories under direct control of the Shogunate during the Edo Period. Officially "Imperial property" or Land under Imperial control", Imperial offices, administration offices etc. The Tokugawa Shogunate directly governed the territories which it recognized as militarily and economically important, developing and managing an administration office, a govern- ment office, jinya (guardrooms), etc in these lands. The major cities of the time, Nagasaki, Osaka, Sado an important gold mine, and Myouban hotsprings where they produced an alum from Yunohana, were all part of the tenryou region. During the Edo Period, the land was divided into territories such as the Imperial, religious (shrines and temples), and Daimyo territories, of which, the Shogunate territory (tenryou) was estimated to occupy 14% of Japan (4.2 million koku (石)) by the late Edo Period, according to the Tenpo 13 years nation- al Kokudaka (total amount of koku (石)) breakdown published by Kaishu Katsu in "SUIZINROKU".

The town where the echo of "tenryou" lingers, Joge. Here, we introduce 7 keywords which will make walking around town more enjoyable. 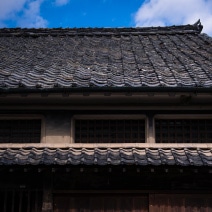 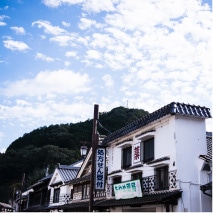 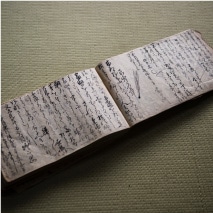 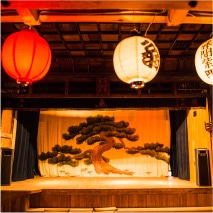 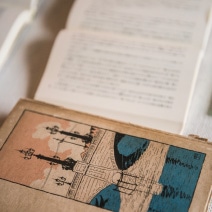 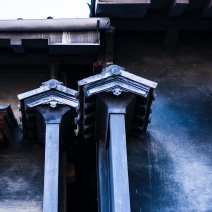 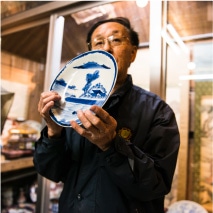 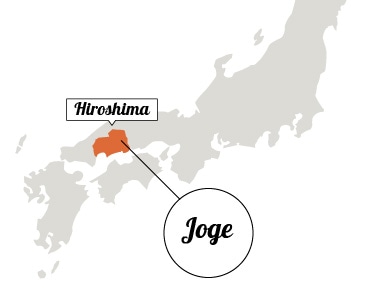 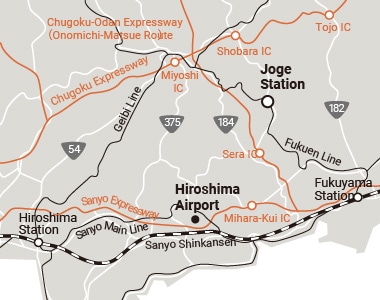 After Iwami Ginzan (silver mine) ’s golden age, Joge merchants contributed greatly to the local economy of the Hiroshima clan, Nakatsu clan and the Fukuyama clan. Iwami Ginzan’s Oomori Prefectural Office appointed Joge’s merchants to run the financial lending business, and it is said the profits from the new business helped compensate for the decrease in silver produc- tion. Approximately 33 financial lenders held business in Joge. As a result of this, the bank- ing/financial system of Joge was called "Joge silver". This system spread to the neighboring countries, and the debt collection was quite strict. Furthermore, most of these funds went to the Tokugawa and Meiji Restoration regimes to support their activites. Ancient Joge was a strong financial base like Wall Street!

In 1862, the "Industry Encouragement Society" (predecessor to the Gishu Foun- dation) was launched for the promotion of education and agricultural industry. In the 44th year of the Meiji Period (1911), the Gishu Foundation was founded by 21 people, including the Joge financial in- dustry, Hirosuke Sumikura and other in- vestment funds. It is said that the invest- ment was managed through stocks and government bonds, providing funding for public development and the agricul- tural industry. The Gishu Foundation was an unusual organization in that it managed to operate without receiving subsidies from the government.

"Eitairoku" (Permanent Records) was a document left behind during the late Edo – Meiji Period by Shigemori Rokuemon, who worked in Joge’s administration of- fice. This record not only contained the latest domestic records, but also content such as comet observations. One can see evidence that Joge, nestled in the moun- tains, was tightly connected to the central government.

As a town on the Silver Highway (Ginzan Kaido), many people passed through Joge. Wealth was accu- mulated and various cultures also developed. Okina- za is an example of the various entertainment that was born as a result of this. Okinaza is an original wooden playhouse and considered very precious in Japan. Erected in the 14th year of the Taisho era (1925), there are screens that are moved manually and an underground space which was dug by hand and are still intact. It is assumed Okinaza mimics the Minamiza in Kyoto (a famous wooden playhouse in Kyoto).

Joge has various literary connections. During the Meiji Era, the model of the heroine for naturalistic writer Katai Tayama’s mas- terpiece "The Futon (Quilt)", Michiyo Okada was born in Joge. Her birthplace was turned in to Joge History and Culture Mu- seum, which has an exhibit on the second floor about Michiyo.

There are historical and tasteful buildings such as : One is "Former Tanabe House" who was a money lender in the Edo era. It was later used as Sake brew- ery . The other one is "The Sumikura’s Warehouse". Sumikura family was a conglomerate, so they built the western style’s warehouse in the Meiji era. It had changed to be used as "Joge Christian Church" You can see the detail of houses at "Udatsu" (roof-attached petals), "Mushikomando" (painted wall windows), "Tatakidashi-Kanban" (signboards made with copper plates), and "Mochiokuri" (deco- rated reinforcements). You can also see delicate works throughout. The streets of Joge are currently undergoing preservation activities. We are aiming for the town of Joge to be "Important Traditional Build- ing Group Conservation Area"

There are several antique shops scattered around Joge’s historical and traditional streets. There is still the possibility of finding unexpected "treasure", as there were many merchant houses that were operat- ed by large stores and financial companies.